Image by Gabriel Gurrola on Unsplash

'You have stolen my dreams and my childhood with your empty words,' climate activist Greta Thunberg has told world leaders at the 2019 UN climate action summit in New York

I pray that the light of God will illuminate the eyes of your imagination, flooding you with light, until you experience the full revelation of the hope of his calling —that is, the wealth of God’s glorious inheritances that he finds in us, his holy ones!

I have spoken before about how the COVID pandemic has on a global scale benefitted the gospel of Jesus Christ by enabling it to be proclaimed around the world by means of online communication. However, at a personal or individual level, the pandemic may not have been so beneficial. For many their dreams, their hope for the future may have been put into reverse gear.

What is hope deferred?

Hope deferred makes the heart sick, but a longing fulfilled is a tree of life.

How does a Christian handle hope deferred? I see an answer from the Bible but in order to get there I want to look at the Old and New Testament. The Old Testament was written in Hebrew mostly for the children of Abraham from Isaac and there is great insight from looking at the hope that Abraham lived by.

Beforehand though I want to consider the Greek of the New Testament in order to compare and contrast. The Greek word for hope is elpis.

According to ancient Greek understanding of creation Zeus was angry that Prometheus (Forethought) had stolen fire from heaven and given it to men. To punish man Zeus had instructed Hermes, the god of trickery, to make the first woman from earth and water (clay) and persuaded the other gods to give her gifts, hence her name, All-Gifts. Although Prometheus had told his brother never to accept a gift from Zeus, when Zeus presented Pandora to Prometheus' brother Epimetheus (Afterthought) he could not resist the attraction of Pandora and took her as his wife. Zeus had given Pandora a sealed jar which she was told never to open. However, Hermes, the god of trickery, had given her the gift of curiosity. Eventually Pandora could contain her curiosity no longer and took the lid off the jar and out came all manner of diseases, misfortune and other evils. Pandora tried to quickly put the lid back on but only Hope was put back inside.

According to Hesiod Hope indeed stayed inside because that was Zeus’ will; he wanted to make people suffer in order to teach them that they should not disobey their gods. Pandora was the right person to do it, because she was curious enough, but not malicious. Hope was bottled up and out of reach and people suffered because they had displeased and disobeyed the gods.

Even today people can relate to this idea. God is upset with me, hope is out of reach and my dreams have been stolen.

Hope becomes a two-edged word. It is something out of my grasp, in the hands of God, and if I try to reach it too quickly, all manner of foreboding evil might happen.

Did the Greeks take their mythology seriously?

The national divinity of the Greeks, Apollo has been recognized as a god of archery, music and dance, truth and prophecy, healing and diseases, the Sun and light, poetry, and more. Apollo's high priestess at Delphi was Pythea, the python spirit woman. The apostle Paul was well acquainted with Greek culture so when he writes to people of a Greek culture he understands their problem with hope.

In Acts 16 in Philippi Paul also recognised the spirit of Apollo, the python spirit, in a slave girl.

It so happened that as we were going to prayer, we met a slave girl who had a spirit of divination, who was bringing her masters much profit from her fortune-telling. 17 Following after Paul and us, she kept shouting, saying, “These men are servants of El Elyon, who are proclaiming to you the way of salvation.” 18 She kept doing this for many days. But Paul was irritated and turned and said to the spirit, “I command you in the name of Messiah Yeshua to come out of her!” And it came out of her that very moment. But when her masters saw that the hope of profit was gone, they grabbed Paul and Silas and dragged them into the marketplace before the authorities.

20 And when they brought them to the chief authorities, they said, “These men are throwing our city into an uproar! Being Jewish, 21 they advocate customs which are not permitted for us to accept or practice, being Romans.”

Paul and Silas had not simply deprived somebody of their livelihood, they had insulted the god Apollo, the god of prophecy. Apollo, the python spirit, was a strangler of hope who sought to crush the life out of anyone who disregarded or dishonoured him.

Paul wrote two letters to the church in Corinth. Corinth was founded by Sisyphus who according to mythology cheated death twice, so when he finally died Zeus decided to punish him in hell by making him push a boulder up a hill. Everytime he reached the top the rock rolled back down and he had to start over again. The lesson was to never try to outsmart god's will. The patron god of Corinth was Apollo and there was a major temple to the worship of Apollo there where there are still ruins today. When it comes to discussing hope with the Greeks in Corinth Paul has to wrap it in faith and love.

In this life we have three great lasting qualities—faith, hope and love. But the greatest of them is love.

Love knows no limit to its endurance, no end to its trust, no fading of its hope; it can outlast anything. It is, in fact, the one thing that still stands when all else has fallen.

A Greek expected a god to get jealous, angry, change his mind and therefore blessing in this life was a sign of the favour of the gods. In Corinth the rich would enjoy feasting and drinking at the fellowship meal while the slaves had to wait and get whatever was left over because that was showing God's blessing on those that he was pleased with. Paul makes the point that the Christian hope is bound up in Christ so it is completely different from the Greek idea of hope.

Truly, if our hope in Christ were limited to this life only we should, of all mankind be the most to be pitied!

Paul, Jesus Christ’s messenger by command of God our saviour and Christ our hope

Paul, a servant of God and an apostle of Jesus Christ to further the faith of God’s elect and their knowledge of the truth that leads to godliness— 2 in the hope of eternal life, which God, who does not lie, promised before the beginning of time,

Looking for that blessed hope, and the glorious appearing of the great God and our Saviour Jesus Christ;

Paul again and again has to remind the church at Corinth that this life is not the main event. Resurrection from the dead and the appearing of Jesus our Saviour is what we are to hope for.

To gain an understanding of hope we need to look to the Hebrew revelation of God which is tied into the word pictures of its language. The Bible was written in the Old Testament in Hebrew to express God's revelation of his nature, his character, his choosing of a people for himself. The New Testament is written in Koine Greek to address the people of the world in general, using a language that was known from Spain to India, used as widely as any language on earth at the time.

1 Chronicles 28 tells of how King David wanted to build a temple to God but was told that it would be his son that would be the builder. Sometimes our desires are not part of God's plan and it seems he will show us this. We need to allow for others to do what we would like to see done. The book of Hebrews is written to show the Jews how grace through Jesus Christ is superior to the Law of Moses.

Hebrews 7:20-21 The high Priesthood of Christ rests upon the oath of God

This means a “better” hope for us because Jesus has become our priest by the oath of God.

Hope is our rope 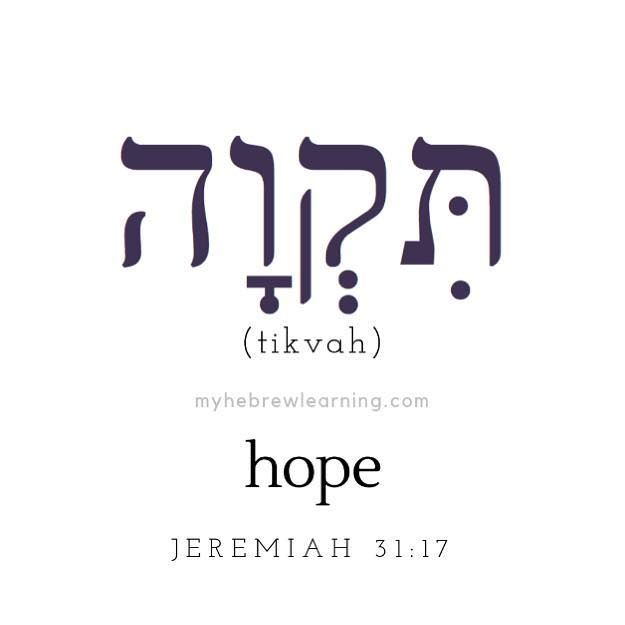 The lines of purpose in your lives never grow slack, tightly tied as they are to your future in heaven, kept taut by hope.

Not our own effort that keeps our purpose strongly tied to hope.

We know that we are held firm by God; it’s only the people of the world who continue in the grip of the Evil One.

“You’re blessed when you’re at the end of your rope. With less of you there is more of God and his rule.

God is gracious—it is he who makes things right, our most compassionate God. God takes the side of the helpless; when I was at the end of my rope, he saved me.

We have this certain hope like a strong, unbreakable anchor holding our souls to God himself. Our anchor of hope is fastened to the mercy seat in the heavenly realm beyond the sacred threshold, and where Jesus, our forerunner, has gone in before us. He is now and forever our royal Priest like Melchizedek

Abraham was 100 years old before he became the father of the promise of a son. Moses spent 40 years in Pharoah's palace, 40 years leading sheep and unlearning the wisdom of Egypt before he was ready to lead the people of Israel out of Egypt. King David died before seeing the temple that his son was to build.