I have recently been studying the book of Daniel and so began to look up online sources for information about the dates of some of the events that he describes in his eventful life. He was likely about fourteen years old when taken as a captive from Jerusalem to Babylon by Nebuchadnezzar's army, probably in 605 BC as the army was returning from crushing the Egyptian armies of Pharaoh Necho at Carchemish. Daniel is thought to have died between 538-530 BC when the Persians ruled Babylon and there is a major shrine known as the Tomb of Daniel in Susa. In the course of my research I came across various responses in Quora and other sites stating that the Book written in his name was compiled during the time of the Maccabean rebellion against Antiochus IV (168-164 BC) and so much of the predictions were written post the events described. This point of view was especially common with reference to the Jewish historian Flavius Josephus in Antiquities. According to Josephus, in visiting Jerusalem, Alexander was greeted by the Jewish high priest, Jaddua, who presented the king with the Jewish community’s capitulation; then Alexander offered a sacrifice in the Temple. The reason for the Jewish capitulation was that they recognised Alexander as the king who was prophesied in Daniel chapters 2 and 7, written before 550 BC, to overthrow the Persians and were able to show Alexander that he would defeat Persia. Many people clearly hold the view that Daniel was written after the events it describes and that Josephus invented a fancy story to improve his narrative.

Josephus on Alexander in Jerusalem

Can we know the future?

Before looking at what rabbits have to do with this, can we expect that the Bible will offer predictions of future events in its prophetic writings? Jesus had previously told his disciples that no-one will know when the end of the age would come.

Jesus replied, "It is not for you to know times or seasons that the Father has fixed by His own authority.

These statements were made in response to questions about the specific issue of when Jesus would restore the kingdom of Israel but it was made in the context of Jesus having been crucified and risen from the dead a few days before. The focus that Jesus wanted the disciples to understand was that the church was about to be established to accomplish what the establishment of the nation of Israel a thousand years before had failed to produce: an earthly witness for God to peoples of the world and not just the descendants of Abraham by Isaac and Jacob.

What we can know

5 Now, brothers and sisters, about times and dates we do not need to write to you, 2 for you know very well that the day of the Lord will come like a thief in the night. 3 While people are saying, “Peace and safety,” destruction will come on them suddenly, as labor pains on a pregnant woman, and they will not escape

Here the context is that Jesus has gone and the issue was when would he return. Jesus had previously said Matthew 24:36

“But about that day or hour no one knows, not even the angels in heaven, nor the Son, but only the Father.

“Praise be to the name of God for ever and ever; wisdom and power are his. 21 He changes times and seasons; he deposes kings and raises up others. He gives wisdom to the wise and knowledge to the discerning. 22 He reveals deep and hidden things; he knows what lies in darkness, and light dwells with him.

32 “Now learn this lesson from the fig tree: As soon as its twigs get tender and its leaves come out, you know that summer is near. 33 Even so, when you see all these things, you know that it is near, right at the door 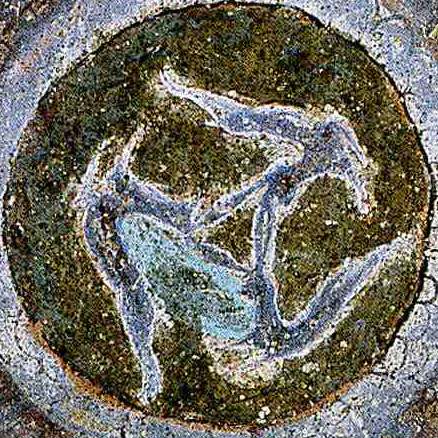 Image of 7th century motif at Mogao caves in China

One argument I have seen to support the claim that Daniel was written in the second century BC, 300 years after the events it describes, is that the Aramaic chapters include Greek words for the musical instruments in Daniel chapter 3. I knew from my schooldays that Xenophon had led a Greek army of mercenaries out of Persia as described in the seven books making up the Anabasis composed circa 370 BC, so the Persians were no strangers to Greeks in the fourth century BC. There is evidence of mercenaries being hired in Ancient Greece from the 6th century BC. Mercenary troops from Caria and Ionia are known to have fought with Psamtik I against the Assyrians. These were the "bronze men from the sea" whose arrival in Egypt, according to Herodotus, was foretold to Psamtik by an oracle. Ancient kings often preferred their closest bodyguards to be foreign mercenaries as they were less likely to have an agenda for assassinating the king.

The three hares motif is found in China and has been dated to the seventh century AD. A similar motif is found in Iran, Egypt, Germany and France but especially in the tin counties of Devon and Cornwall UK on 12th century church buildings as shown in the wooden ceiling boss illustrated.

So the three hares motif has travelled five thousand miles from China to UK over 500 years moving from Buddhism to Christianity while passing through Islam, evidence of how something from one culture can transfer to another just as Greek musical instruments became known in Persia. I shall return to this theme in another article when I look at the prophecies of Ezekiel as it has an important implication in future events.

Daniel prophesies the coming of world empires in Daniel chapters 2 and 7. Daniel 2 describes the empires as seen from the viewpoint of King Nebuchadnezzar with his empire being the greatest of them all. Daniel 7 is about those same empires seen from God's point of view where the emperors were beasts, animals using their power to tear down and destroy others in order to pursue their own selfish and arrogant aims but nonetheless being used to bring about God's plan and purposes. The Persians allowed the Jews to return to Israel and rebuild the temple that Nebuchadnezzar had destroyed. They also allowed the Jews to assemble and collate their scriptures into a complete form to conclude the Old Testament. The Greeks introduced a common language that was easy for people to learn across the empire and eventually the New Testament would be written in that language. The Romans improved logistics within their empire, enabling ships and roads to be used to spread the scriptures throughout the empire and beyond.

Daniel predicts the coming of Messiah

The beginning of the Second Temple period (586 BC-AD 70) is marked by the return of Jews to Jerusalem from their exile in Babylon in 538 BC. Daniel never returned to Jerusalem so presumably he had died by 538 BC. They were allowed to return under an edict issued by Cyrus King of Persia. By 515 BC the reinstated Jewish residents had completed building the Second Temple.

Daniel recognised that Jeremiah had prophesied that the Jews would spend 70 years in exile (from 606 BC) in Babylon before being allowed to return to Israel.

24 “Seventy weeks have been determined for your people and upon your holy city, to finish the transgression, and to make an end of sins, and to make atonement for iniquity, and to bring in everlasting righteousness, and to seal up the vision and prophecy, and to anoint the Most Holy Place.

25 “Know therefore and understand that from the going forth of the command to restore and to rebuild Jerusalem until the Prince Messiah shall be seven weeks, and sixty-two weeks. It shall be built again, with plaza and moat, even in times of trouble. 26 After the sixty-two weeks Messiah shall be cut off and shall have nothing. And the troops of the prince who shall come shall destroy the city and the sanctuary

Daniel prophesies that 483 years (69 X 7) will pass before Messiah comes but that he will be be cut off and the troops will destroy the Temple and Jerusalem.

The Christological section in the Wikipaedia article The seven and sixty-two-week "weeks" are most frequently understood for the purpose of Christological interpretation as consecutive, making up a period of 69 weeks (483 years) beginning with the decree given to Ezra by Artaxerxes I (reigned 465–425 BC) in 458/7 BCE (the terminus a quo) and terminating with the baptism of Jesus. The reference to an anointed one being "cut off" in verse 26a is identified with the crucifixion of Jesus and has traditionally been thought to mark the midpoint of the seventieth week, which is also when Jeremiah's new "covenant" is "confirmed" (verse 27a) and atonement for "iniquity" (verse 24) is made.